Jasmine Pineda is back on Instagram following claims that she was fired due to Gino’s ex. 90 Day Fiancé fans find out how much Jasmine has changed. 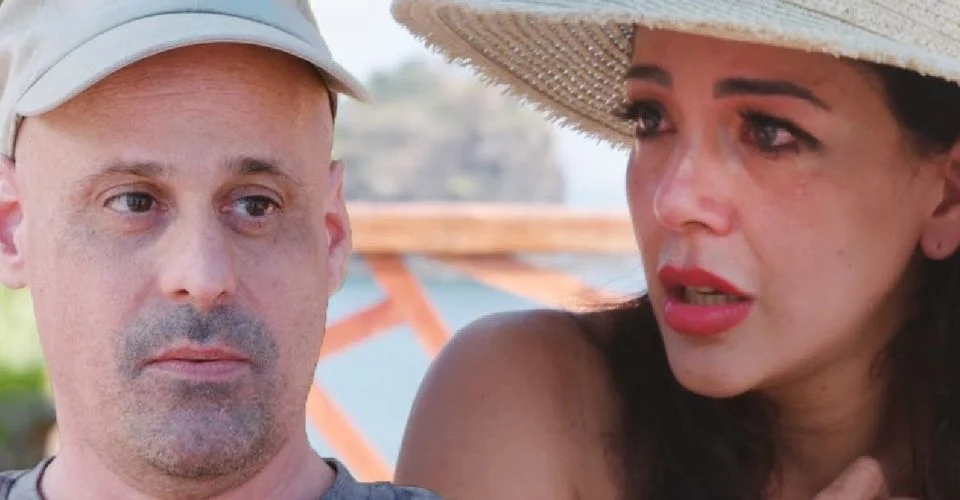 90 Day Fiancé star Jasmine Pineda revealed a whole new version of herself on Instagram after her wild fight with Gino Palazzolo and allegedly getting fired due to his ex-girlfriend. Panama City beauty Jasmine, who is 34, became a household name after her loud debut on 90 Day Fiancé: Before the 90 Days alongside Michigan man Gino. Jasmine has been referred to as the villain of the season many times thanks to her jealous nature, but fans recently realized that 52-year-old Gino is the one who was hiding darker secrets. After the wild fight that fans witnessed in episode 10, Jasmine still got back together with Gino. But Jasmine is currently going through a lot, and she even said that she’s “lost everything” in her life.

Gino violated Jasmine’s trust just to make his ex-girlfriend jealous. But Jasmine claimed that Gino’s ex-girlfriend is still harassing her and supposedly sent private photos to her job, which Jasmine lost. After revealing that she’s at her lowest, Jasmine abandoned her verified Instagram page, which is currently at over 52,000 followers. Jasmine wrote that she felt like trash while announcing a break from Instagram. However, Jasmine did end up coming back via a secondary account, which was meant for her content about fitness and health. On it, Jasmine has been documenting her exercise routines, and recently, she also showed fans her damaged hair.

While Jasmine continues to heal from what she’s gone through, she isn’t stopping herself from entertaining her social media supporters. Her latest post is quite revealing, with Jasmine posing in a pink bikini and grabbing her chest in the NSFW cover photo. A different photo showed glamorous Jasmine all dolled up wearing a leopard printed top and laying in bed. “After being at the very freaking low rock bottom in my life…I’ve come to this conclusion: ‘Whoever feels like their life is perfect to judge on my life, make fun, hate me, or come with negativity: You can come and kiss my meaty, peachy, gym ***,’” Jasmine wrote in her caption. “Let’s start the week with a winner [mentality] my dear friends!” she told her fans. When one concerned follower asked Jasmine, “What is going on?” she told them, “Old Jasmine is dead 😂.” 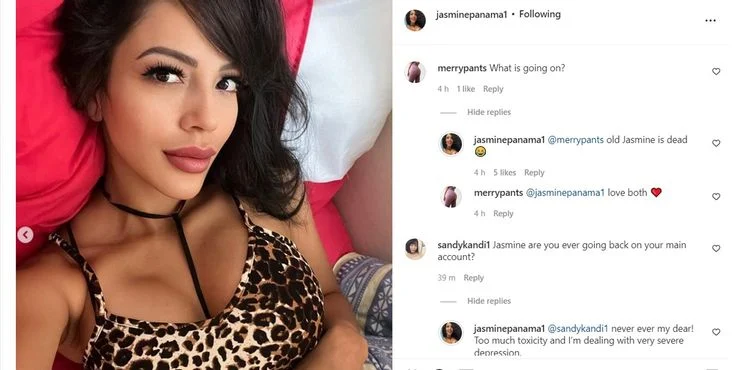 A different fan wanted to know if American lit teacher Jasmine will ever go back to using her main account. “Never ever my dear!” she confessed. According to Jasmine, it has too much toxicity. “And I’m dealing with very severe depression,” she explained. Fans replied to Jasmine telling her that they are praying for her and that she should never ever give up. “Depression doesn’t discriminate and it’s like the cancer of happiness. We can go through it,” Jasmine told a fan. Meanwhile, to someone who else wondered, “Who took that picture?” Jasmine said that she “set up the phone for [a] 10 second picture” on her tripod. “I take all my IG and only fan pictures,” mom of two kids Jasmine added.

Fans love that Jasmine is reinventing herself and also exploring her new life as a content creator. Jasmine’s body positivity posts get a lot of love and so do those where she gives pep talks to herself and to her fans. Recently, after opening up about why she wears wigs, Jasmine revealed her new blonde transformation where she asked people to not demonize wigs. As her season of 90 Day Fiancé nears its end, Jasmine has also transformed herself. Gone is the Jasmine in her weakest moments that fans feared in the first few episodes. In her place is a woman who inspires, even though some fans feel disappointed that Jasmine chose to be together with Gino, despite all the hurt and manipulation.