90 Day Fiancé: How Yara & Natalie Are Reacting To Russian War On Ukraine 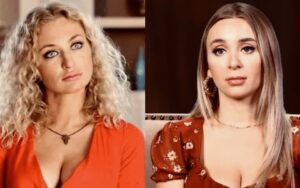 While the 90 Day Fiancé star Yara Zaya is worried about her family in Ukraine, Natalie Mordovtseva avoids sharing about the invasion on social media.

Two Ukrainian 90 Day Fiancé cast members have reacted differently to the current Russian-Ukrainian conflict. Fans may remember Natalie Mordovtseva from 90 Day Fiancé season 7, on which she appeared alongside co-star Mike Youngquist. Natalie left Ukraine and moved to America to marry Mike. Unfortunately, her relationship crumbled under the weight of their problems. While the couple is no longer together, Natalie is still in America, possibly in Florida’s gulf coast area.

The other Ukrainian star Yara Zaya first appeared on 90 Day Fiancé season 8 and married her partner Jovi Dufren. The couple is still together and has a daughter. While the 27-year-old reality star is very happy with her new life in America, she is concerned about her family in Ukraine. Most 90 Day Fiancé viewers may know that the current climate between Russia and Ukraine isn’t good. Yara is worried about her family even though she mentioned that they are in a safe place. While Yara is visibly scared about the current situation in her country, Natalie doesn’t seem to care about it.

90 Day Fiancé fans may notice that Natalie isn’t directly acknowledging the situation, but Yara has openly shared her thoughts about it. She shared an emotional post on February 24 on Instagram. She wrote, “I get calls from friends who are afraid, they hear bombs and do not know what to do.” Yara expressed that she can’t believe the current war situation is happening in the 21st century. She also appeared on Fox News and talked about the lack of resources available to Ukrainians. The mother of baby Mylah said, “They weren’t prepared. They don’t have enough water. They don’t have enough food. My sister called me and said she tried to go to the supermarket, but there’s not enough food anymore.”

But Natalie hasn’t addressed the situation directly. Instead, 90 Day Fiancé fans have found her sharing Instagram Reels on roller skates. She has captioned the post as “Success consists of going from failure to failure without loss of enthusiasm,” and has used popular hashtags such as “#saveukraine” and “#ukrainian #lives #matter.” Instagram account Truecrime_jankie shared multiple posts from Natalie and Russian the native Varya Malina, showing that these two 90 Day Fiancé stars aren’t much concerned about the Russian invasion. Many fans found Varya and Natalie’s posts in bad taste. One fan wrote, “I have no respect for either one of these women.”

It is odd to see how Yara and Natalie have reacted so differently, despite having a family in the same country. While fans have not had the highest regard for Yara, she is now earning their respect. In the past, fans have called her a shallow person, but she is speaking up for her country and clearly looks distressed for her family. Her reaction makes her seem much more considerate than Natalie, who responded to the war with cheerful posts. Some 90 Day Fiancé viewers are confused about how the 37-year-old reality star is happy when her mom is in Ukraine right now, but perhaps it is her way of coping with an unimaginably difficult situation.