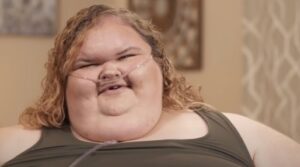 1000-Lb Sisters star Tammy Slaton is a married woman — at least according to her. But is she legally married? Maybe not — at least not yet, anyway.

The TLC reality star and Caleb Willingham said “I Do” on November 19, 2022, at the Windsor Lane Rehabilitation Center in Gibsonburg, Ohio, where she’s been for almost a year. But are they actually hitched?

Tammy Slaton of 1000-Lb Sisters met her Mr. Right — Caleb Willingham — during their stay at the Ohio rehab facility. As previously reported, the happy couple met, and fell in love. Then in early November, they announced their engagement and plans to marry ASAP.

Tammy Slaton revealed she married Caleb at the Ohio rehabilitation center where they both reside. And TLC confirmed it was an intimate ceremony with 30 close family and friends there to celebrate.

The bride wore a long white gown and tiara while carrying a bouquet of sunflowers. The reality star’s big day also included another huge moment for the 1000-Lb Sisters wife-to-be. 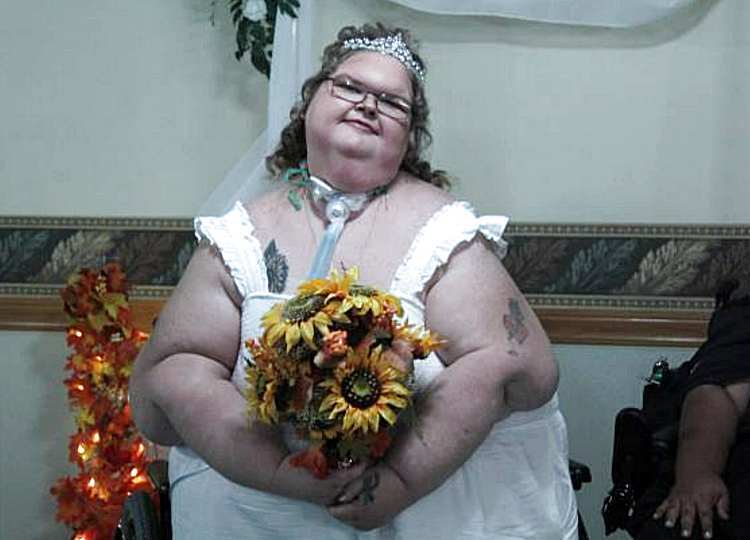 You can see from the wedding photo above that Tammy is standing upright. You can see, to her left, a glimpse of the groom’s arm. And he’s sitting in a wheelchair. But she’s on her feet, which is great progress for her.

In the past, Tammy’s struggles with her weight and health issues often kept the reality star confined to a wheelchair. So, for fans to see Tammy up on her feet during her wedding is exciting.

It also leads fans to believe she is progressing in her weight loss journey. But there’s one glaring issue we found in our research about her wedding. Is it true that 1000-Lb Sisters cast member Tammy and fiancé Caleb are not legally married?

The couple’s paperwork, exclusively obtained by Soap Dirt, shows that the reality star may not be legally married. At least, not yet. When word leaked that they planned to marry last week, SD contacted the county clerk in Ohio. 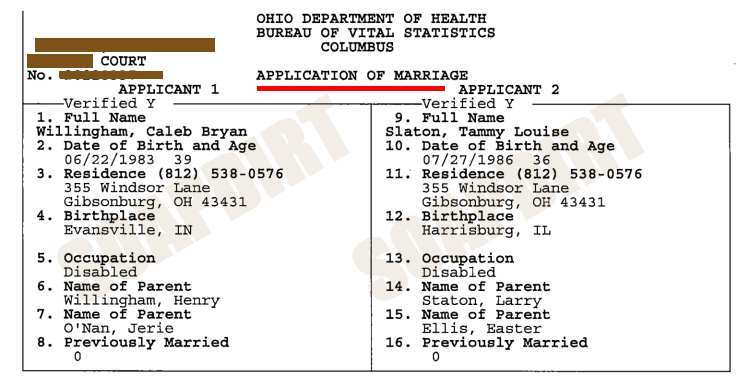 As of last week, there was no marriage license application filed. But they proceeded with a ceremony at the rehab facility on Saturday, November 19, 2022. However, according to our research, the 1000-Lb Sisters sibling had no legal authority to marry.

It wasn’t until Monday, November 21, 2022 that Tammy filed and paid for a marriage application. You can see below the info on the “application of marriage”. This listed their name, ages, and that both reside at Windsor Lane rehab.

When we dug further into the case files, things get strange. You can see the detailed info below. It clearly states that the application to marry was filed a full two days after they said, “I do” in front of other 1000-Lb Sisters cast members.

That same day, a judge approved the marriage license application. Now, they have the approval to marry. But the marriage ceremony was performed two days prior. So far, the clerk’s office doesn’t show a marriage date or location or officiant info.

Given that the ceremony already occurred, perhaps Caleb and Tammy need to say their vows again before a judge. Why? According to Ohio law, the license must be obtained BEFORE the wedding, not after. 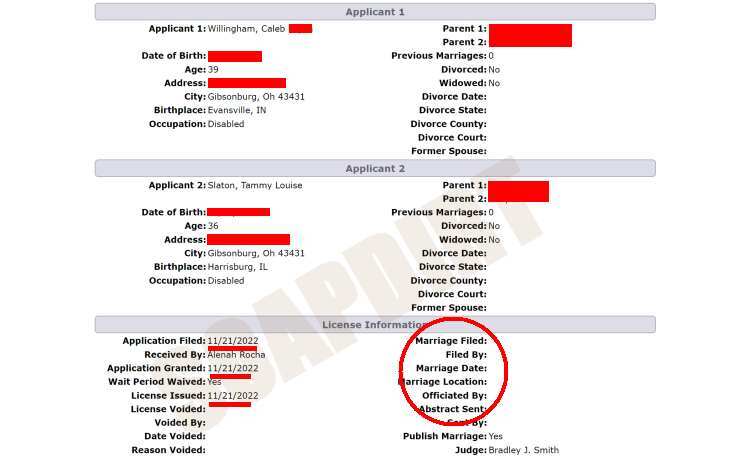 Given this timing, we have to wonder if the ceremony was scheduled for the convenience of her family. Or was it for filming by 1000-Lb Sisters cameras for the new season.

Perhaps Tammy will say vows again with Caleb to make it legal. As of this writing, Tammy Slaton’s likely not legally married, according to our research. A rep from the county courthouse couldn’t explain the discrepancy.

TLC fans sent well wishes to the couple. And it’s certainly great news that Tammy found a man who can understand what she’s going through with rehab. Since Caleb’s on the same journey.

Tammy Slaton got married and it makes me so happy

Viewers also say they are excited to see that TLC will document Tammy’s journey with Caleb in Season 4. They say they can’t wait to see what the new season holds for them and the rest of the cast members.

Don’t forget to mark your calendars. Season 4 of 1000-Lb Sisters premieres January 17, 2023, on TLC and Discovery Plus. The big question is whether Tammy Slaton follows through and makes this marriage legal. Right now, it doesn’t seem to be…