Amy Halterman and Tammy Slaton are so excited that 1000-Lb. Sisters is coming back for another season. Both women have been pretty quiet about the show’s future on social media. In fact, many fans assumed TLC cancelled the show. But that all changed this week when the network confirmed the show’s fourth season.

Fans are really excited to see what storylines will happen in the new year. But Amy also recently announced that the Slaton sisters are no more. What does she mean? Will TLC cover that storyline too?

Keep reading to get the inside scoop.

It’s been a pretty big year for both Amy Halterman and her older sister Tammy Slaton. Amy gave birth to another son over the summer while Tammy continued her journey in rehab. Tammy also allegedly received bariatric surgery, which will likely be a major storyline in Season 4. 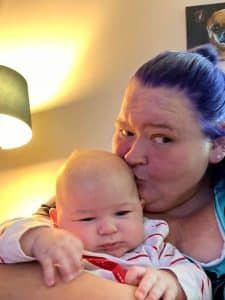 But that’s not all — she also fell in love in rehab and went on to tie the knot.

In a new Instagram post, TLC uploaded a video of Tammy and Amy at the wedding. Amy proudly announces that the Slaton sisters are over and that Tammy’s new name is Mrs. Willingham.

“For the first time as a married couple…Tammy and Caleb! 💍💍 #1000lbSisters returns Jan 17 at 9ET,” TLC captioned its video.

Plenty of fans and followers gave Tammy a giant cheer in the comments section — including Tammy’s doctor, Dr. Eric Smith.

“they both are looking great! i’m happy for Tammy! cant wait for the new season! I’m so proud of Tammy for losing some weight and getting the help she needs! 🙌❤️” another fan wrote.

A few other fans expressed concern in the comments. They were happy that Tammy found someone special, but they worried that they may enable each other’s bad habits since they met in rehab.

Fans will have to tune into 1000-Lb. Sisters in January to see what happens next. Hopefully, Tammy will finally get her happily ever after with her new husband.

When can fans catch new episodes of 1000-Lb. Sisters?

According to InTouch Weekly, 1000-Lb. Sisters Season 4 will come to TLC on Tuesday, January 17, 2023 at 9 PM eastern time. There will be new episodes each Tuesday night so fans can keep up with Amy, Tammy, and the rest of their family members. With any luck, Tammy’s special day will be included in the season.

Tammy and Amy are definitely coming back for Season 4, but it’s not immediately clear if the rest of their siblings will make an appearance. Fans really seemed to love Chris and Amanda, so hopefully they will be featured in Season 4.